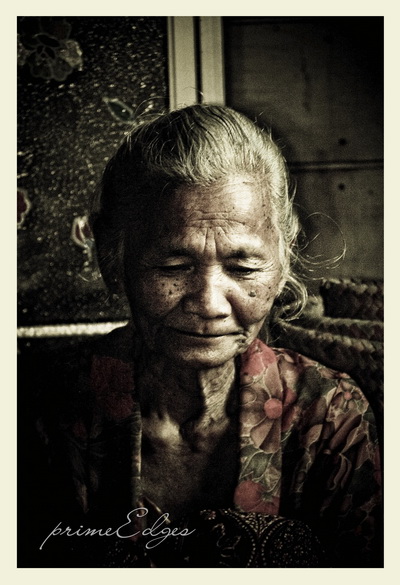 An old woman I met was sitting in the kitchen. She’s my friend’s grandma, visited my friend’s house for a wedding ceremony of her grand-daughter. I don’t know her name, neither her age. We just called her “Mbah” simply nickname means “grandma”.

Mbah came from a village in Central-Java, crossed the sea to our island in her age. I do believe it is such a strong effort, yet admirable. She spook Javanese with a gently thick accent, acted like an old lady, tend to be calm, groomed, poised but still humble, represent her age and ancient javanese background she preserved.

In the following days, I met her, she was wearing Kebaya again. Kebaya is a traditional javanese women dress. We actually have now, modern ones which are more colorful and stylist, but surely for ceremonial event only, not as daily clothes. But she is still wearing the old style ones every day, again, every single day. For me it looks so uncomfortable.

I asked her relatives, “Doesn’t she want to change her dress to more comfortable one, such a daster (maternity dress)?”

“I don’t know… She just looks like other old lady in her village, kind of an inherited habit… ”

I’ve never got the exact reason from her until now. I am wondering how tough she preserves the culture while present women might start to be “take it easy”, and I am thinking whether other old javanese ladies out there do the same thing. and how many? How long? Do you have idea?

PS: sorry for my poor english! 🙂

PrimeEdges, This is called, a gallery of my life, provides you a padded couch to relax and drink a cup of sweet tea... Welcome!